Ever since Bre's Tilly came to live with us briefly last year, Sophie has been longing for a kitten of her own. I'd have been happy if Tilly had just stayed behind when Bre moved away, but no, Tilly wanted to move away with her mama.

Sophie had been asking for weeks if we could rescue a kitten from the humane society, but the answer was never what she wanted to hear. Whether it was accompanied with "I'm allergic," or "Your dad only likes Tilly," the response was always the same: no, no, and no.

Last week, I gave Sabrina a call to let her know that I'd secretly changed my mind about letting Sophie have a kitten, and I needed her help. We scoured all the shelters in the area by internet and phone, but found only older cats. I didn't mind older cats, as I would have loved to adopt the cat that had been at the shelter the longest, but with the hooligans and their antics, I thought a young kitten would be a much better idea. (I decided this after talking with Theresa from Shakespeare's Peddler, asking her for some advice on what to look for in a kitten. Thanks, Theresa!)

Finally, Sabrina found a 4-month-old at her local Petsmart, which adopted out cats and kittens from a nearby shelter. We decided to stop there first, and Sophie thought we were simply going to look at the cats, and maybe play with one; she had no idea that Sabrina had chosen this location specifically…

Here's a side note: Earlier in the week, Soph asked if we could visit a shelter and perhaps play with a cat. I told her that only those serious about adopting could play with the cats, and she said, "Well can we pretend we're serious about adopting?" So I pretended to think about it, and told her that we certainly could pretend to be interested in adopting. But of course, she had no idea that I wouldn't be pretending. 😉

…So into Petsmart we went, and Sophie spied the 4-month-old. 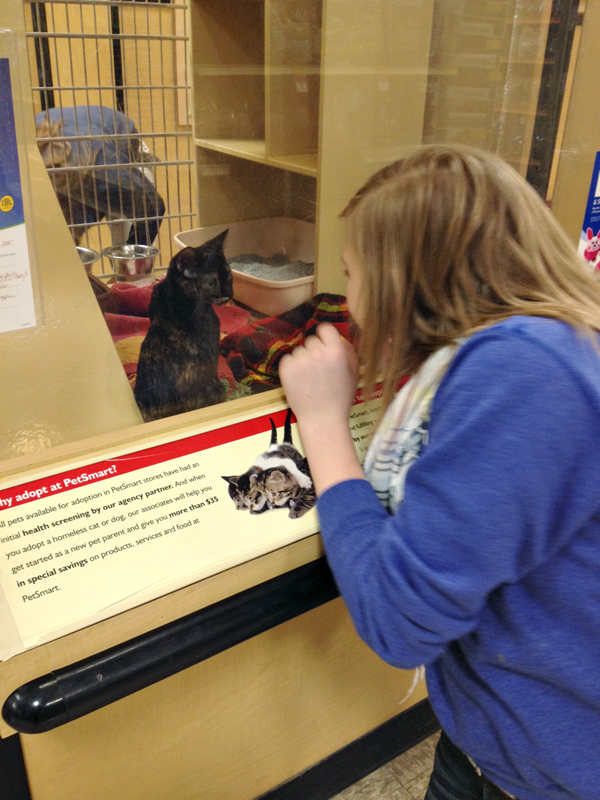 At this point, Sophie was just pleased that I was playing this "secret" game of ours so she could play with the kitten. So into the little room the three of us went, and the employee brought her out to us. She set Tilly on the ground, and after a long stretch, Tilly ran straight to Sophie. We all cooed and giggled at her, and finally we couldn't stand it any more and each of us held her. She was as gentle and charming as could be, and never minded us passing her around.

I asked a few questions about the adoption process, and Sabrina mentioned how she thought this was the perfect little kitten for Sophie to take care of. When we looked at Sophie, her face was a mix of emotions, because in her mind she knew we were "just pretending" for the employee, but in her heart she was desperately wishing that our intentions were sincere. So Sabrina and I knew in that moment that it was time to come clean.

There was a pause as the reality of it registered, and suddenly she put her hands over her eyes and started sobbing. Now it was mine and Sabrina's turns to be surprised! We both hugged her as she sat between us, and she kept saying "thank you, thank you, thank you" to us through tears. It truly was a very special moment.

The adoption went through speedily, and soon it was time to choose a carrier to take Tilly home in and for Sophie to fill out the adoption papers. It thrilled Soph to be handed the vet records by the Petsmart employee, as it made her feel as though Tilly was truly hers. 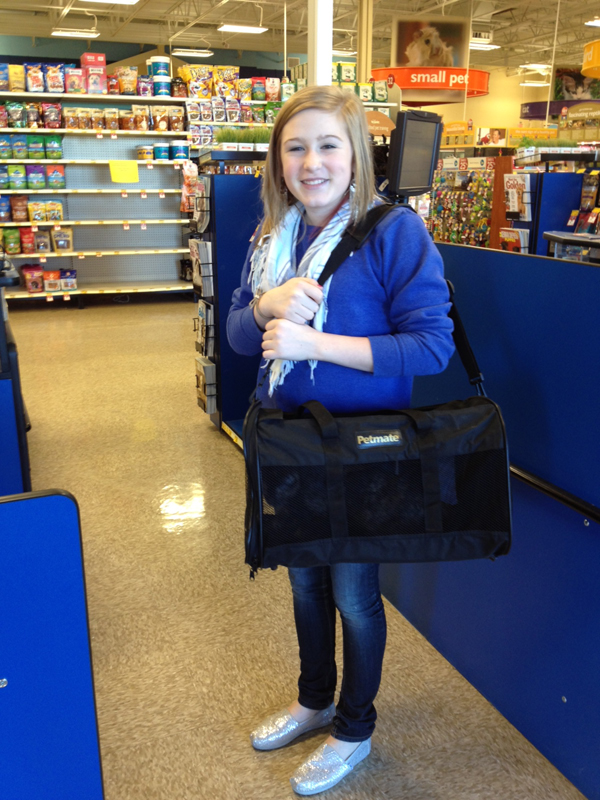 Here is the mama and her new baby, on the car ride home… 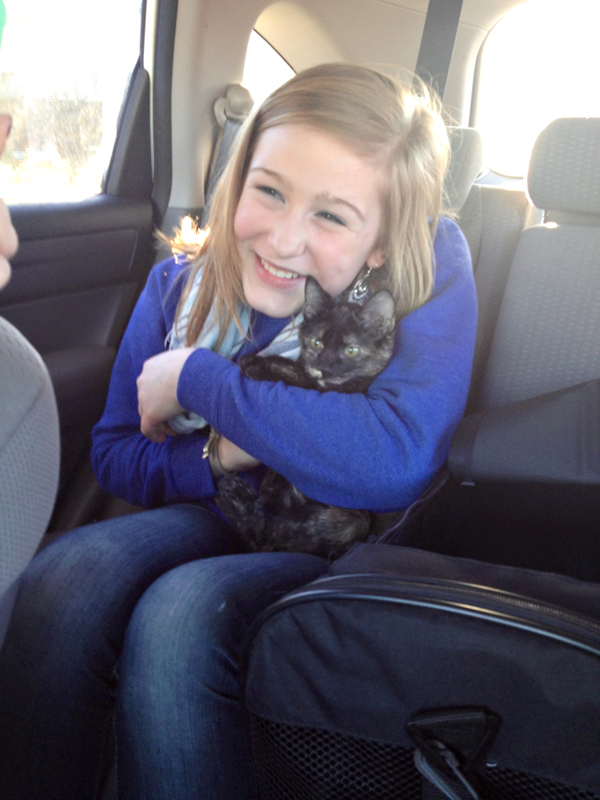 Tilly rested in Sophie's arms the whole ride home, which lasted about an hour. 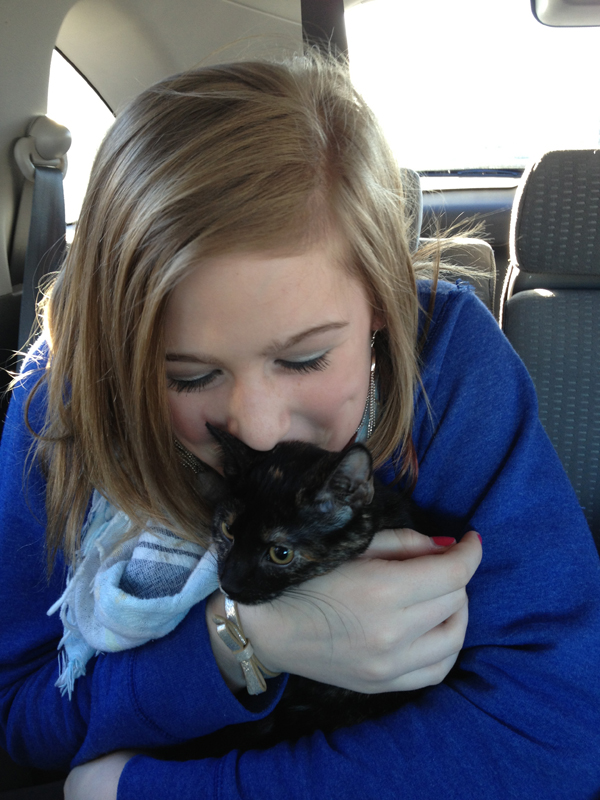 Little Tilly, whom Sophie officially named Tilly-Roux to be a little different from Bre's sweet kitty, is settling in nicely. She doesn't have quite the moxie that Bre's Tilly had when the hooligans are around, but I'm sure that will change as she grows bigger. The Yorkie has figured out that this little one is frightened easily, and is taking full advantage of it. Tasha, however, is only trying to be her friend when she charges her portly self at the little feline.

I have no doubt that, in time, this Tilly will be batting The Yorkie's behind like Bre's Tilly did. 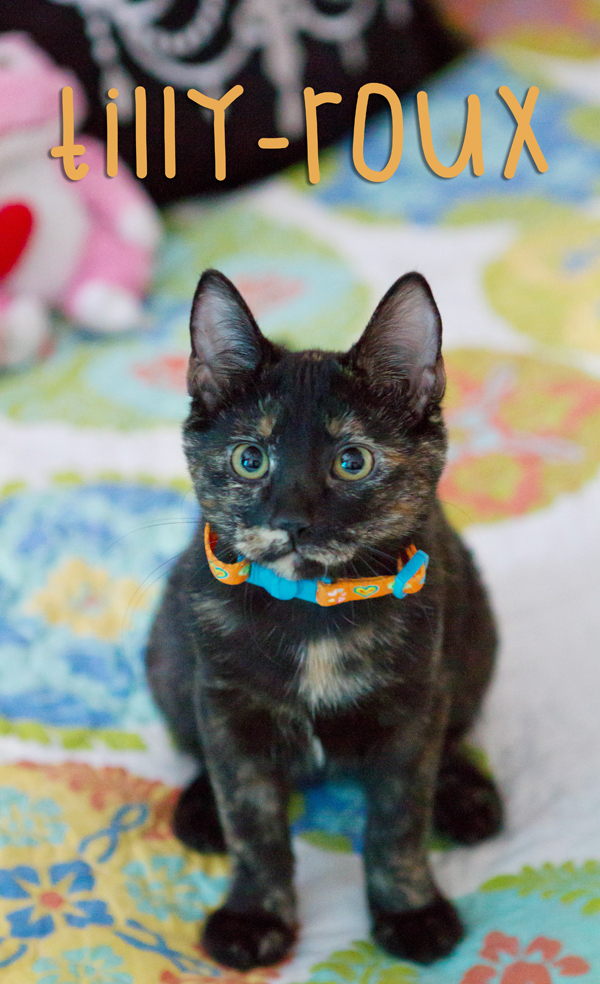 Thank you, Sabrina, for all your help in this. And thank you, Bre, for making your dad see that cats really are as sweet as dogs. (He loves this Tilly as much as his first grand-kitty.)