Yesterday Mike took Soph and I to Horseman's Park, bc it was the last day of the races here in Omaha. Despite the heat – and a nasty burn – we had a lot of fun.

Here's Mike, explaining to Sophie how the racing and betting program works… 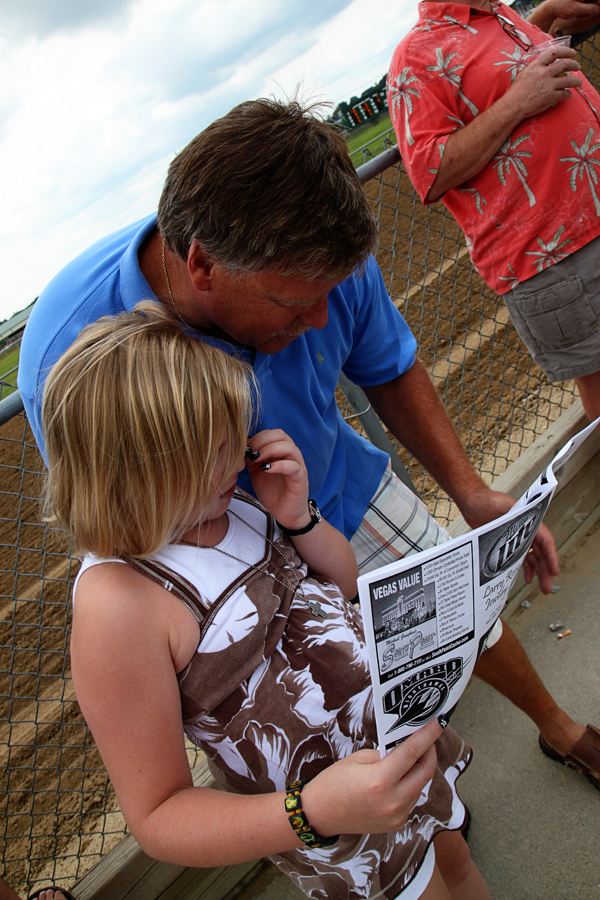 (Instead of a new hat for the event, Sophie bought some new stick-on nails and applied those. Who doesn't wear black polish and skulls to the races?)

Of course, Mike and Sophie both decided that this was the horse to beat: 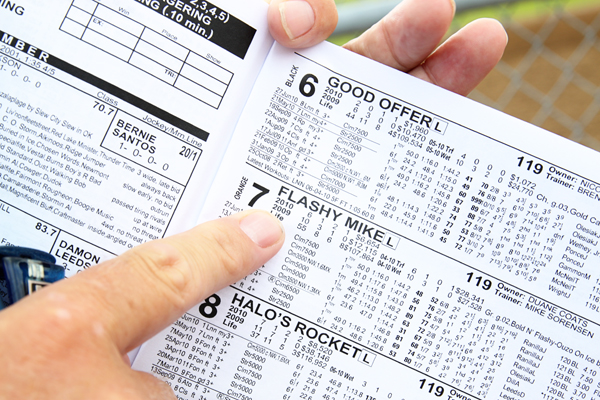 The bugle sounds, and soon they're off! 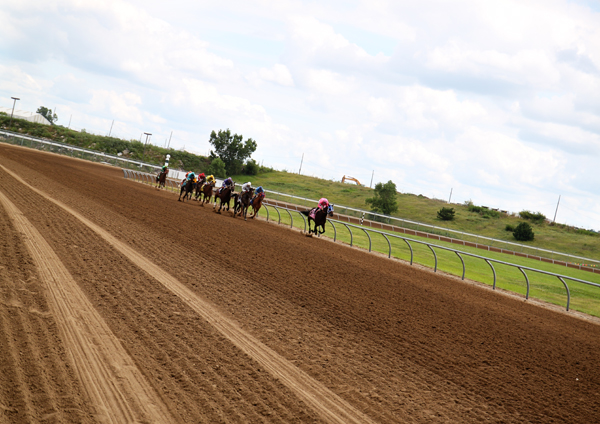 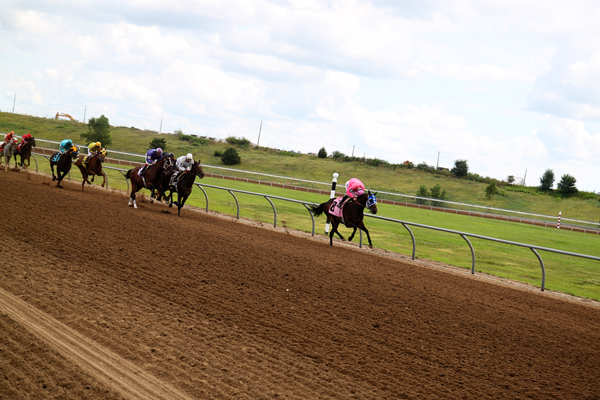 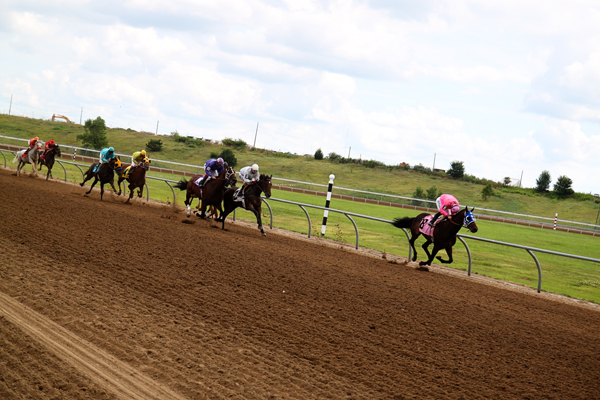 Where in the hay is Flashy Mike? 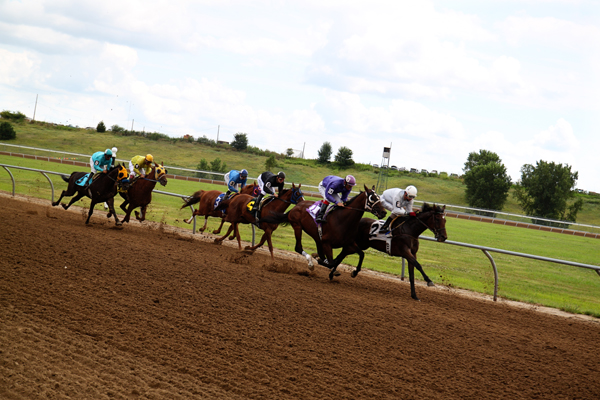 Look! There he is! 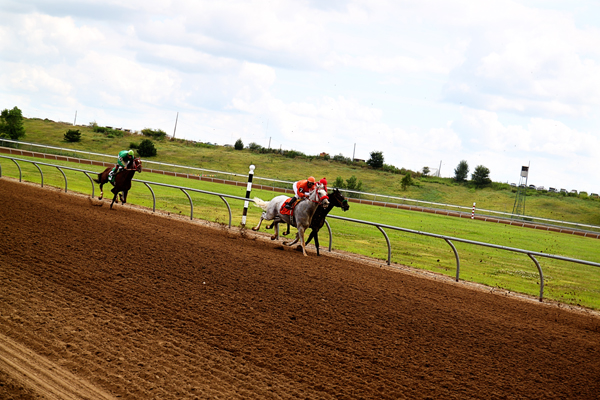 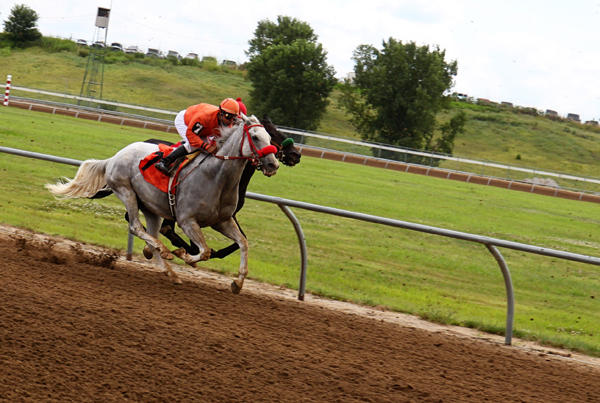 Come on, boy, you can do it! You only have one more lap to catch up! 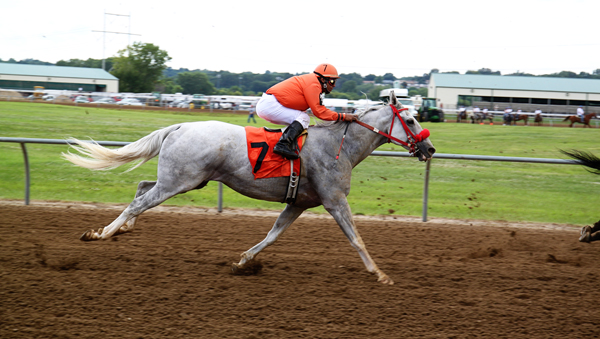 Okay, Flashy Mike sort of got left behind, but that's okay. He was fun to watch. 🙂

After that crushing defeat, Mike and Sophie decided it was time to eat… 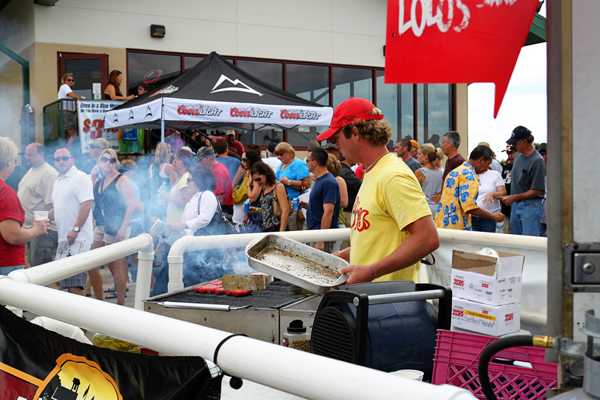 …And they picnicked on the back of a fire truck. Soon Sophie was back to studying the numbers in the program… 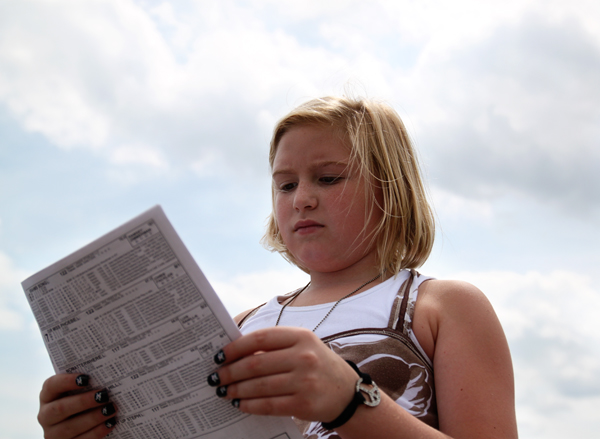 In the next race, Sophie chose a horse named No Matter What to win, and he did! Sophie was suddenly $18 richer, and decided to finish out her day at the races by jumping in the bounce houses and getting her face painted… Only in the Land of Opportunity can a 10-year-old bet horses and have her face painted on the same day. 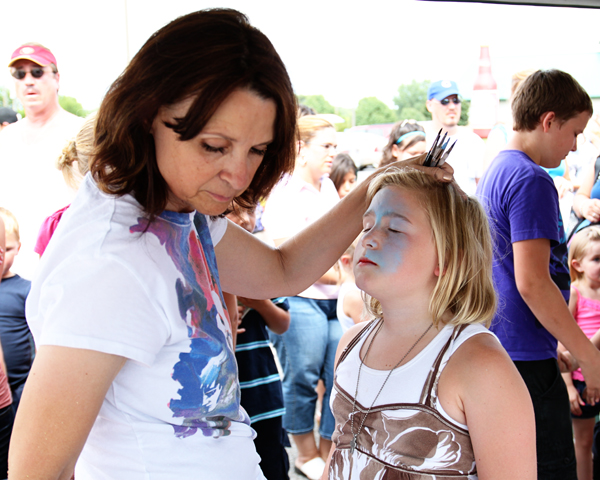 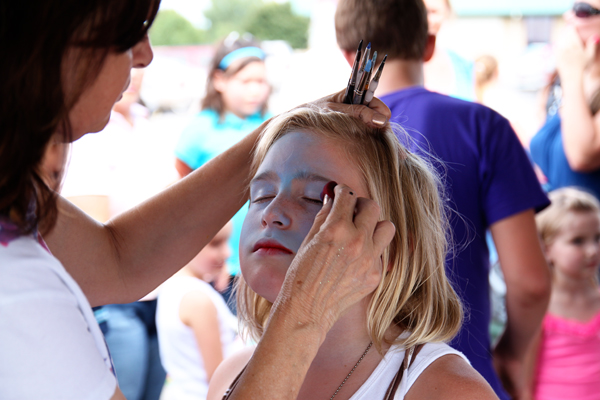 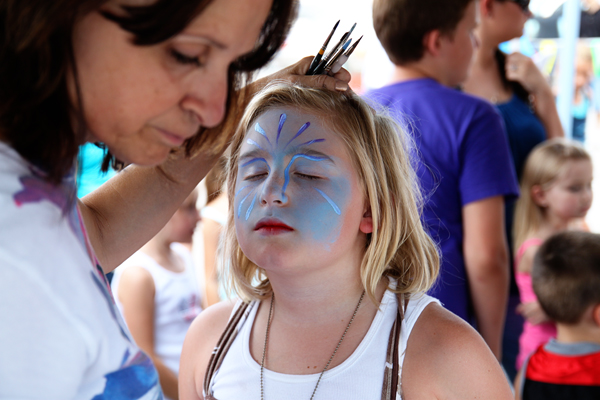 (While Sophie was waiting in the hour-long line, Mike brought her a red snow cone.) 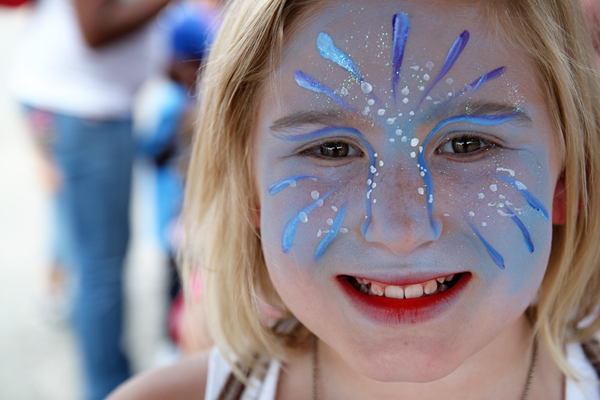 I don't recall the Avatars having red lips and teeth, but that's okay. 🙂 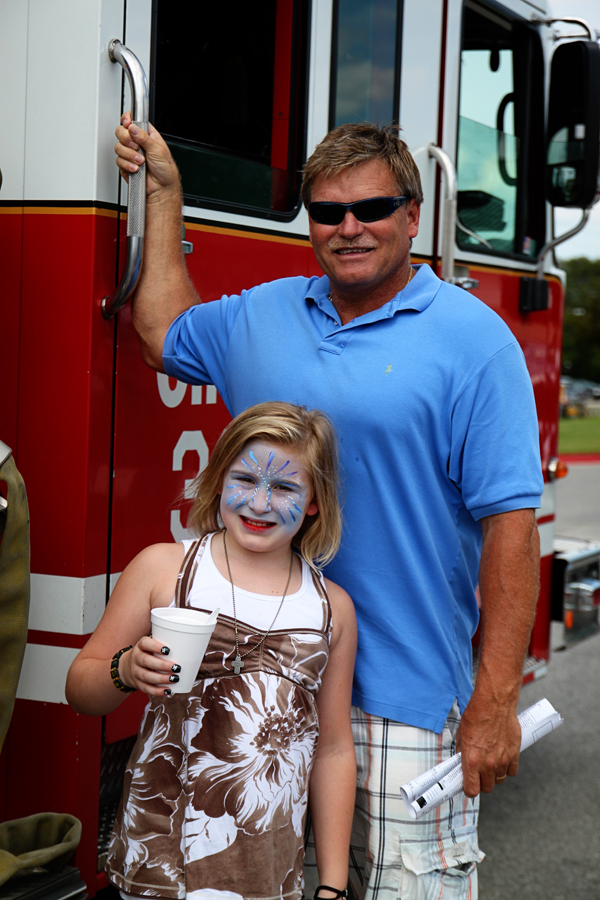 Mike walked over to speak with one of his former co-workers, Officer Cardinas, and Sophie was pleased to meet him. 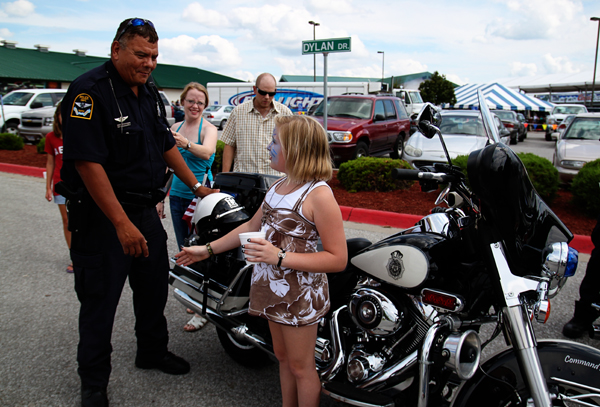 Remember when I mentioned that there was a "nasty burn" during the day? If you've ever accidentally touched your leg to a motorcycle muffler, you know exactly what I mean… 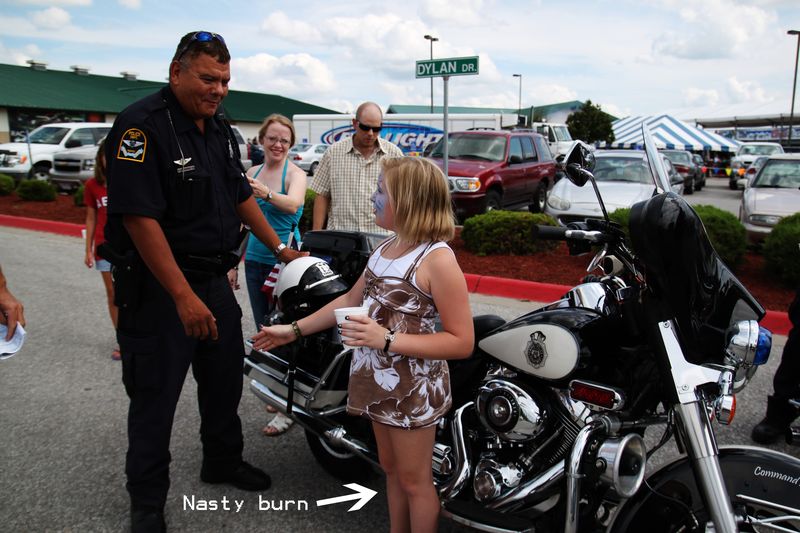 None of us realized how badly it hurt her, bc all she allowed herself to say was "Ouch!" So we carried on… 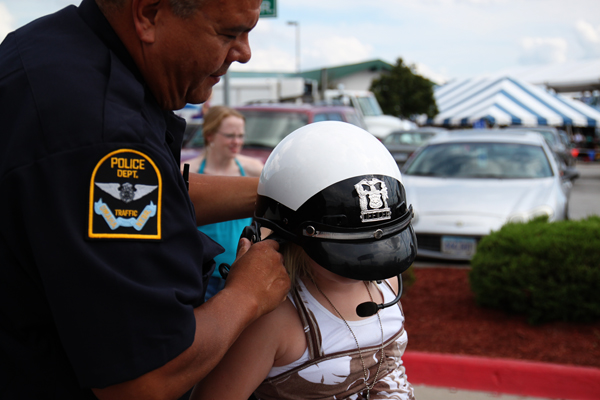 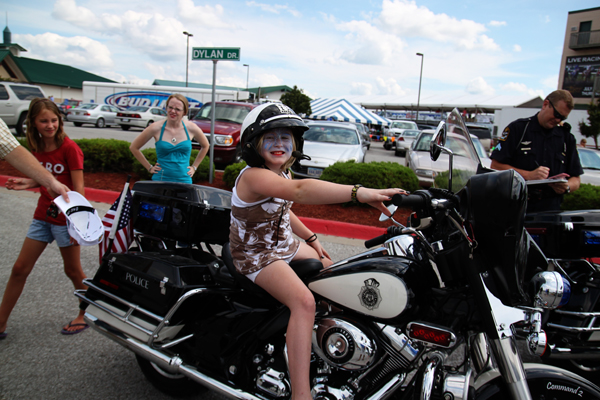 Something in her expression, however, told me that she wasn't feeling as lighthearted as she was moments ago, and as soon as she was off of the motorcycle, she walked away from the group and started to cry. 🙁

Her poor leg blistered up in the back, so the officers gave her some ice water from their cooler, and Mike tried comforting her, explaining that he didn't realize she was so close to the muffler. (Btw, the cops weren't at the races to show the public their motorcycles and let kids sit on them… we were just visiting them bc Mike knew who they were, and Soph thought it would be fun to sit on a motorcycle.)

To make her feel better, we went to Sophie's favorite restaurant: Olive Garden. 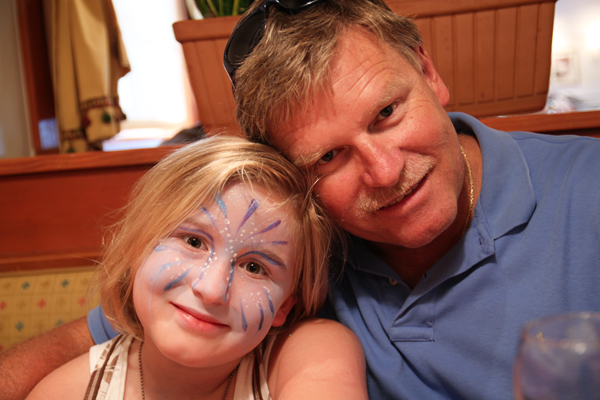 Her Avatar makeup had a few tear-streaks in it, but eventually she cheered up. 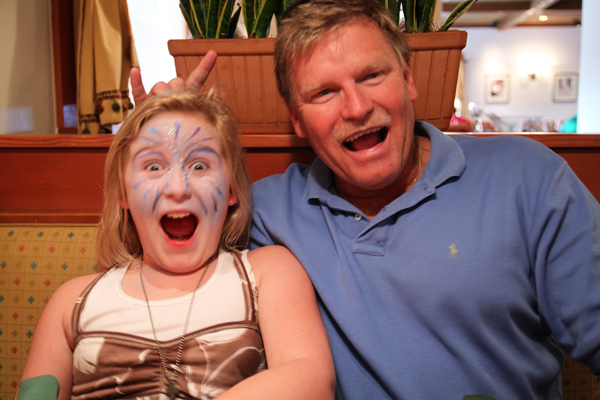 Her dad has that effect on her. I guess that means Flashy Mike's a winner after all. 😉