I've been asked on more than one occasion how far in advance I come up with a design before I release it. My usual response is that I'm an eleventh-hour designer who doesn't realize it's the Christmas stitching season until about December 20.

I say all that to let you know that I had intended to come out with these designs earlier, but I couldn't, because I had not thought them up yet. 🙂

Shipping to your local needlework shop (those on my auto) next week are two new releases that I'm very excited about! I don't know why, other than each contains a favorite thing of mine: the color pink, and little stitched animals.

I've always loved Jane Austen quotes, and the one in the design below comes from Emma. My dear friend Pat Ryan stitched the model in no time at all, and she used a gorgeous linen by R&R Reproductions called In the Pink (32 ct). (The color equivalent of In the Pink would be roughly DMC 225, to give you an idea of what it should look like on your monitor.) 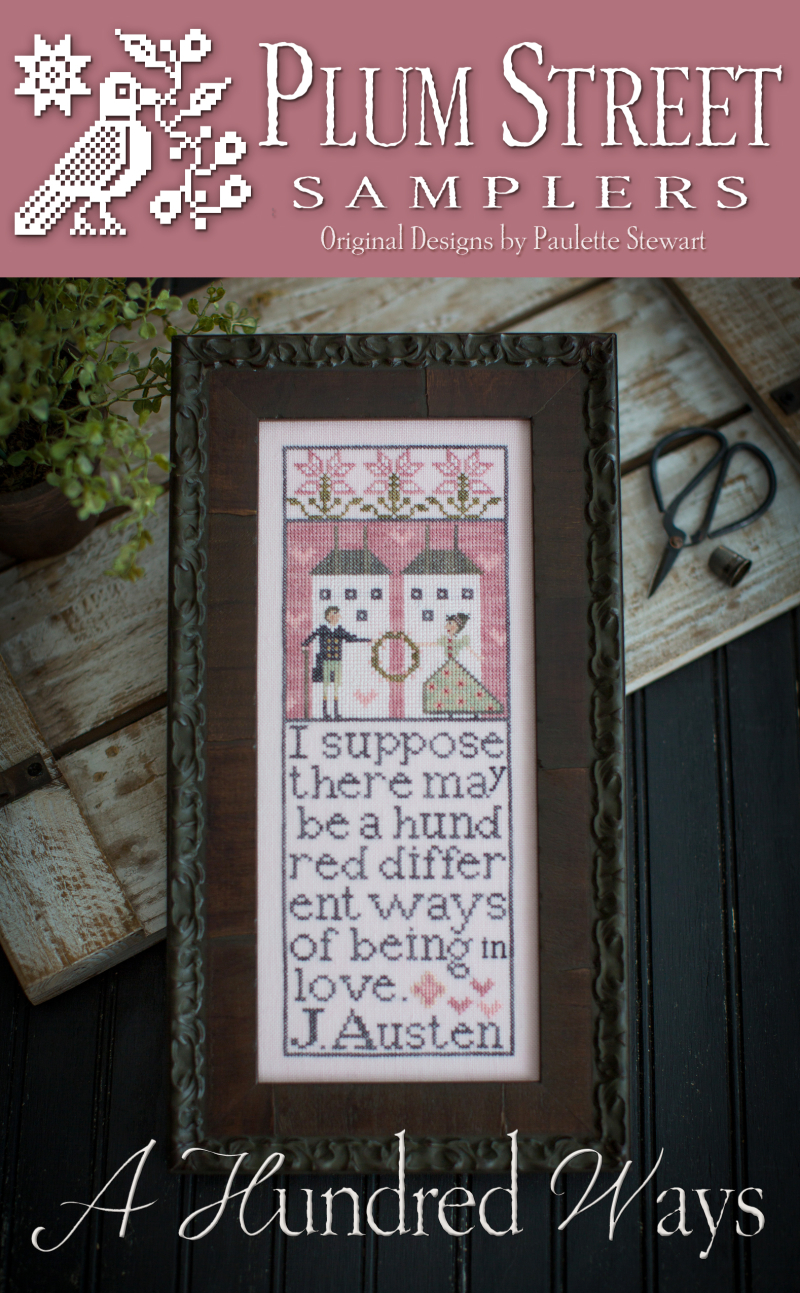 Fabric: 32 ct. In the Pink by R&R Reproductions

There is a little bit of over-one stitching in the faces and hair, as well as a few little letters,  but other than this, all cross stitch is used.

You'll notice the four DMC colors I listed above; I always give a conversion to DMC on all of my charts, for all of the colors. But in this case, there were two colors that were used for only a very small number of stitches. Therefore, I decided to go with the DMC color, rather than switch to a more expensive overdyed floss. Read on, if you'd like further explanation:

Generally, when I'm reviewing the colors of a chart before it's finalized, I will take very similar colors in that design and condense them into fewer colors, so that there aren't so many colors to purchase for one design. Other times, I really do prefer the subtle differences, so I leave them as they are. Recently, however, I've taken to noting how many stitches per color are in my designs, and I'm going to try to start using DMC where there are very few stitches used. Of course, if you prefer all overdyed flosses, then simply ask your needlework shop what their suggestion is, based on the dye lots they have in their inventory.

My next release is the first in a series of Christmas ornaments! This will be a year-long series, with two ornaments per chart released 6 times throughout the year. There are 12 ornaments total (plus one more – I'll explain in a bit!), which can be stitched as they are shown on the covers, or all together, on one piece of fabric! It just depends on if you want a larger sampler at the end of the year, or 12 + 1 individual ornaments.

And here is the first of Noah's Christmas Ark… 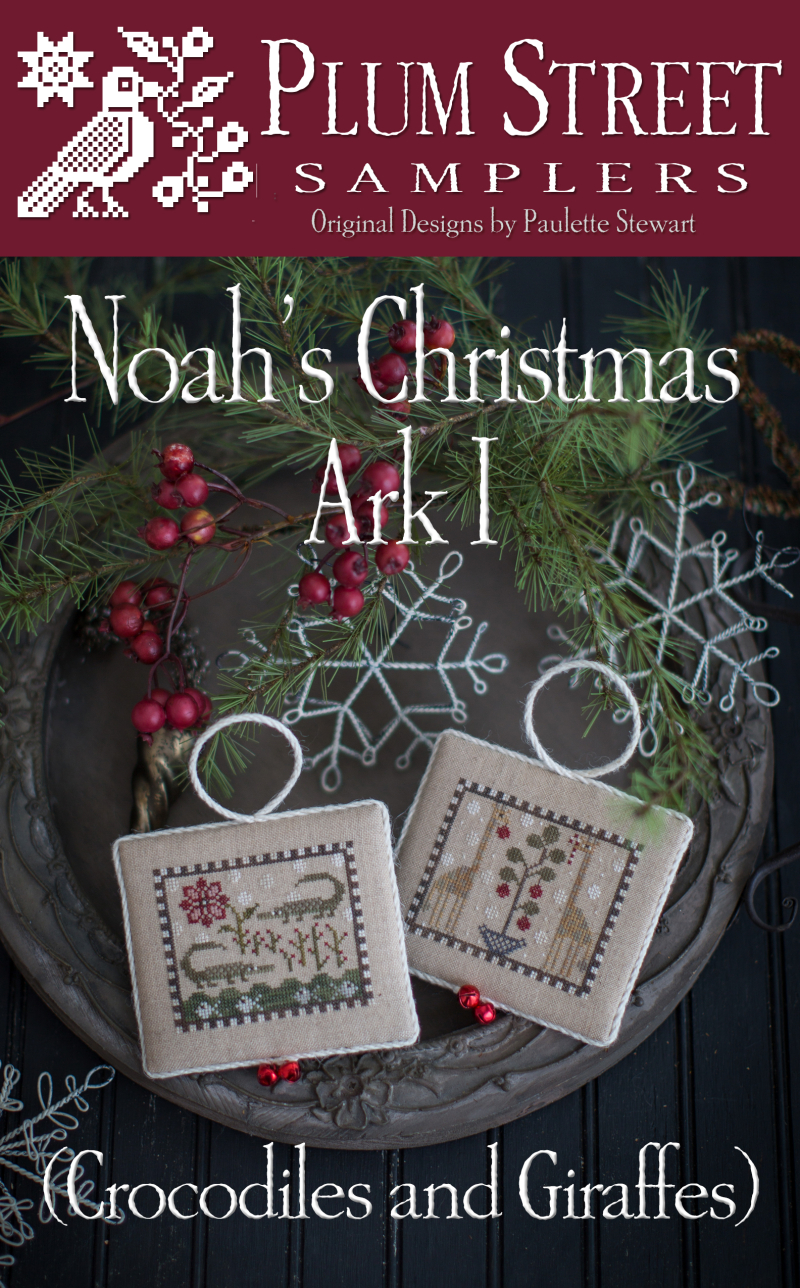 Here is a little bit of info for you…

If you choose to stitch these as ornaments, each block will be 58w x 48h. But if you want to stitch them all on one piece of fabric (three horizontal rows with four blocks each, pictured below), your stitch count will be 244w x 152h. This stitch count includes four blank rows (or 8 threads if using linen) both horizontally and vertically between each of the twelve blocks.

The ornaments will be stitched on 36 ct. Patriot's Brew by R&R Reproductions.

The threads used on just the Crocodiles and Giraffes are as follows:

If you want to have all the threads on hand for the entire project, regardless of how it is stitched, you will also need the following six colors:

I would also recomment that you have 2 Grapevine and 2 Parchment on hand.

All of the ornaments are stitched in full cross stitch over two threads, but there are just a couple of blocks with a few back-stitches or long-stitches in them.

Finishing by: Joy Hayward of Finely Finished. Thank you, Joy!

Here is a suggested layout for the ornaments, if you'd like them all stitched as one project: 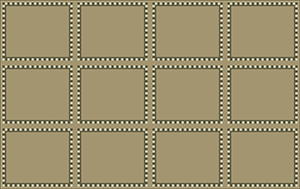 I would not, however, suggest stitching all of the borders first, as there is one upcoming release that actually extends into its own border by just one stitch. I can't say which one that is, bc it's not out yet, but also because I don't know where you would like your animals placed on the grid above! It's completely up to you! 🙂

As a way of introducing this series, I'd like to offer you a complimentary chart called "Noah's Welcome Mat." It's yours for the printing, and it is the 13th block in this series I mentioned earlier. The grid above shows all twelve borders for the regular releases… you may, of course, choose to stitch Noah's Welcome Mat in one of the blocks, but if you use an even-grid layout, one of your animals will have to be kicked off of the ark, so to speak.

Here is what the finished Noah's Welcome Mat looks like, stitched by my friend Pat Ryan (who also stitched the first two above, and will be stitching the entire series! Thank you, Pat!).  The printable chart is available in the link under the photo. 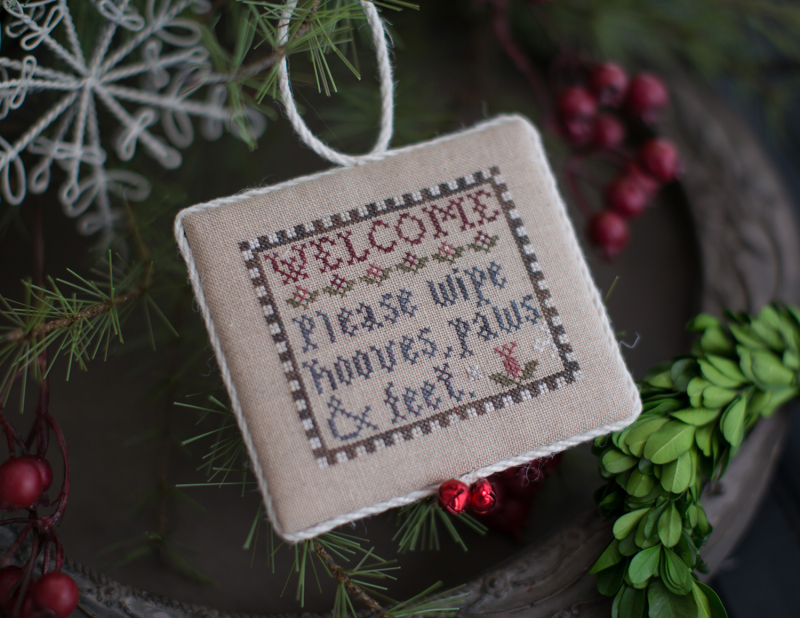 I hope you like these first two Plum Street charts for 2018! I think this is going to be a fantastic year, and I hope you have lots of fun with your needlework projects… even if you don't start your Christmas stitching until December 20. 😉

Thank you so much for stopping by to visit my blog… I'll see you all again soon!