By the time you read this, I'll be way up in the sky, happily awaiting my tiny bag of airplane peanuts while I'm making a bee-line to St. Charles for market.

(By the way, I read on www.phrases.org.uk that the phrase make a bee line came from the "waggle dance" that forager bees perform for other bees in order to tell them where a good source of nectar can be found. Apparently, the angle and length of the dance denotes how close and in what direction the bees should fly, and as soon as it's communicated, they "make a bee line" straight to the appropriate flowers. Hopefully I won't break out in one of these waggle dances as soon as I de-plane.)

The next release has nothing to do with bees, believe it or not. But it does have to do with wiener dogs.

First there was Halloweenies, and then there was its companion Winter Wienerland. The next in the accidental series of Doxie-designs is a Thanksgiving-themed one: 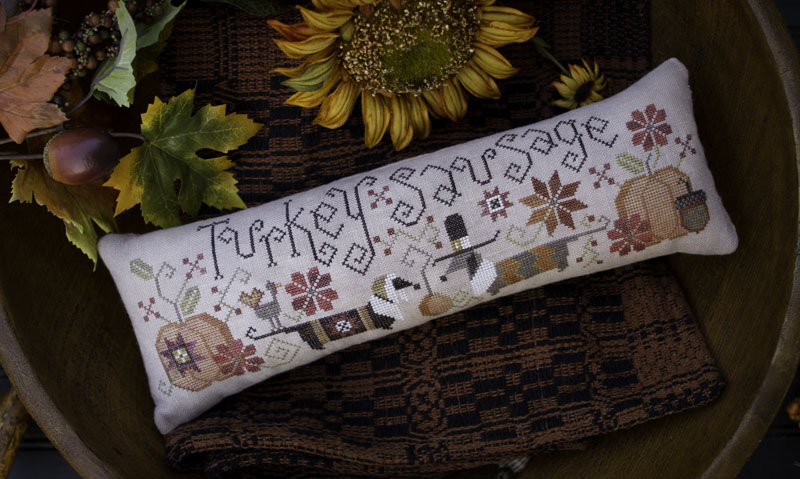 Thank you once again to Nicole Neville for stitching the model for me!

I'd like to take a moment to thank all of you who have received this little series so warmly, whether or not you actually own a Dachshound. I've never owned one, but I find them to be the most hilarious of the little dog sort, and the few that I've met have been the gentlest creatures.

Stop by tomorrow for a peek at my final market release, and don't forget to let your shop owner know as soon as possible if you see anything anywhere online that you'd like for her/him to bring back to you! I'm very, very excited to see what is being offered this time around from some of my favorite designers and thread and linen dyers!