Thank you so much, Dawn! What a sweet offer!

Speaking of stitching, it's been ages since I picked up my beloved Elizabeth Sheffield (from The Scarlet Letter). Mom and I started this as a stitch-along in the latter part of the summer, but then things got in the way and I had to put it on hold. I thought I'd be put off by all the over-one stitching in this piece, but it turns out that I'm addicted to doing it! I'm so excited to get back to it, but that won't be until some time in 2012, most likely.

Here was the last progress picture I took, although I actually am a bit farther along than this… 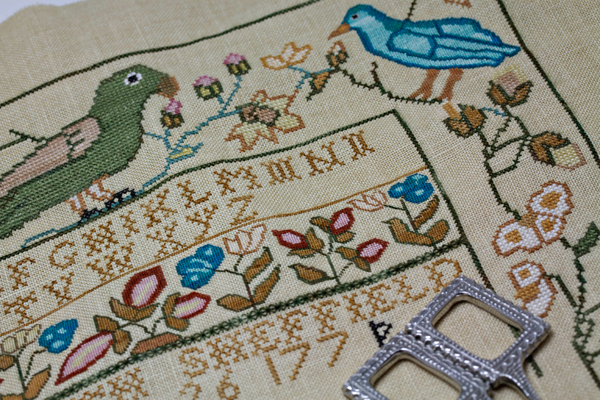 I started the over-one stitching with the bright blue bird up at the top. I had intended to do full crosses since I was working on 36 ct linen, but I noticed that the farther along I got, the more cramped for space the threads were. I couldn't figure out why the stitching was so laborious for me, and that's when I realized that the stitches looked awfully small… so I took out my ruler and did some measuring, and it turns out I had been stitching on 40 ct the whole time.

I finished the bird in full crosses (which is a normal thing for many stitchers, but not for me!), but as for the remainder of over-one stitching on this sampler, it will be completed in tent stitches. Phew! 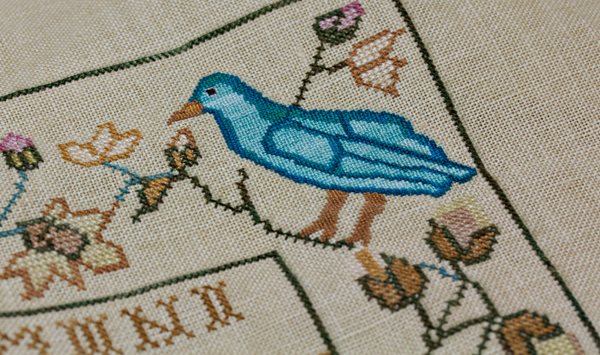 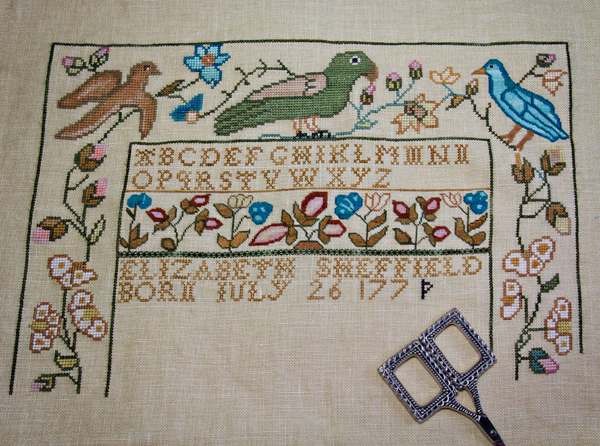 I've stitched down to the row of Colonial couples so far, and the first lady is finished. I left off with most of the man stitched, and am very excited to pick this lovely project back up again. It has truly been one of the most enjoyable things I've ever stitched!

When it's finished, it will go in Bre's room, which you may remember is being re-decorated in a Colonial Couples theme. And when Bre comes home, she'll just have to put on a lace bonnet and do her homework with a quill and inkwell, by candlelight. 😉