I used to be an early riser.

For years it was 5 am, and then I went through a phase of 3:45 that I didn't love much, but grew to. This year I suddenly joined the 6:30 club, which I also don't care for, because I generally feel that by 7 am, my day is half over. I am happiest in the zero-five-hundred-hours range.

This morning I woke up at my beloved 5:15, which has given me lots of ambition for the day. And that translates to another blog post, right on the heels of yesterday's post. That never happens!

(After reading over what I've written, I do realize that it's a sorry state when "ambition" is defined as one blog post per day for two consecutive days.)

So here I am, coming to you with information about my latest releases, as well as a chart error or two that I've been made aware of.

The new patterns I've just shipped to shops this week are these:

A Thousand Hills… I posted about this one on Instagram, bc I've recently fallen in love with bovines. Katrina Devine stitched this (as well as converted the DMC palette to beautiful overdyed flosses), and her little granddaughter Ellie seemed to enjoy watching her stitch it, which made me smile. It made me happy that Sophie immediately claimed the sampler for herself – which also never happens. 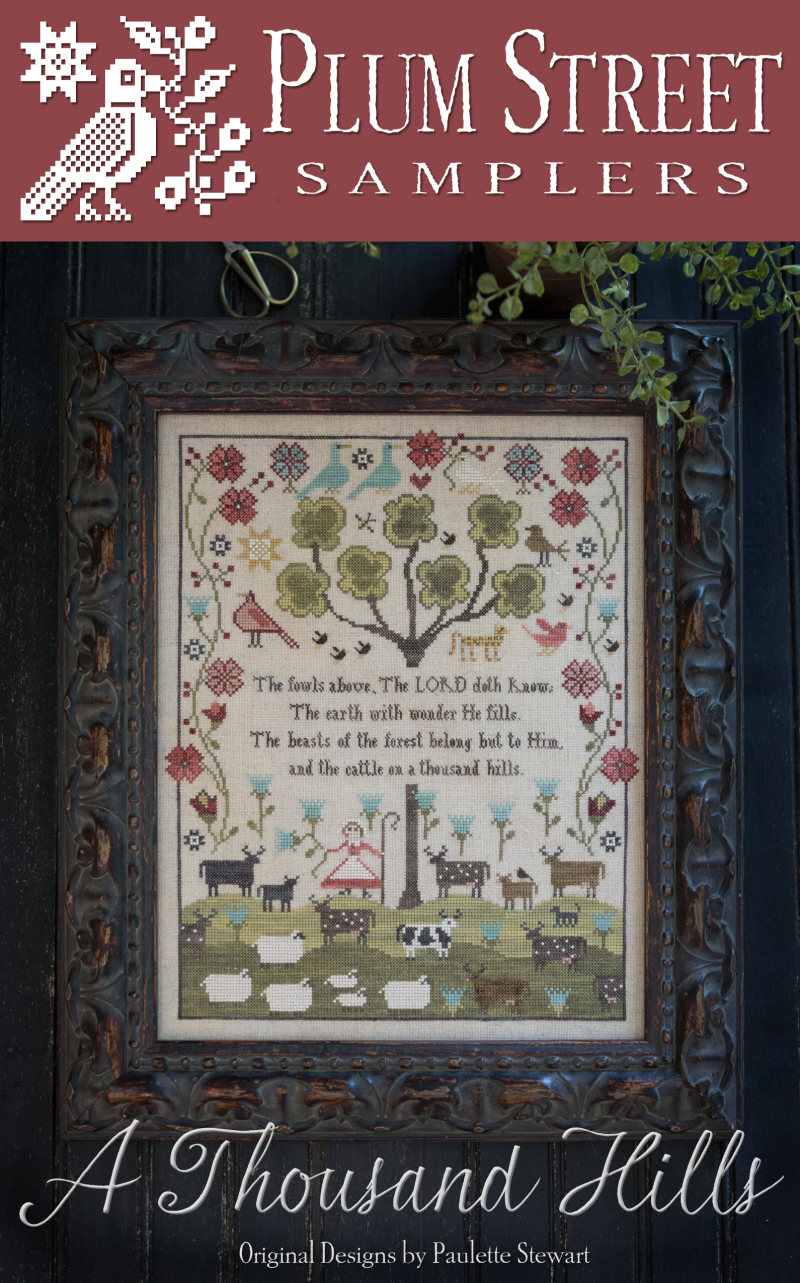 The stitch count is 156w x 194h, and it is mostly cross stitch over two linen threads, with the tiny black birds stitched over one thread.

THE FOLLOWING IS A PUBLIC SERVICE ANNOUNCEMENT: 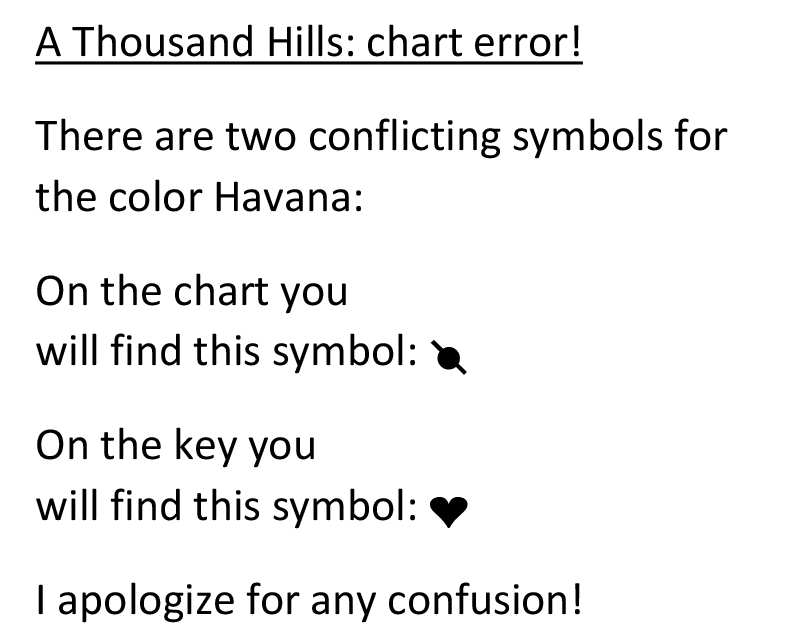 Berry Cottage… This one is sort of a follow-up to A Red Cottage, released a few years back. At first I had this dubbed "A Plum Cottage," but something about it wasn't working for me – and that's when I realized it was the color. So I changed it to a rosewood color, added some berries, and found I liked it much better! 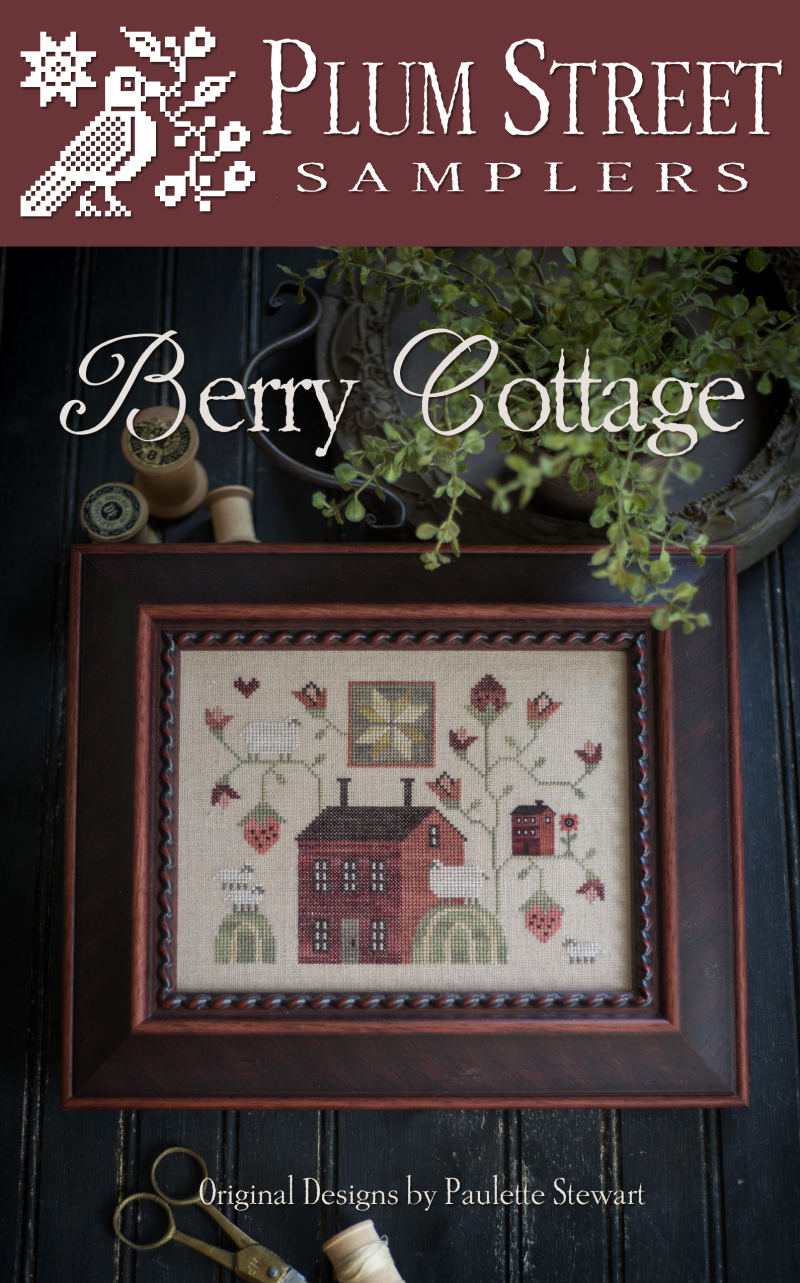 The stitch count for Berry Cottage is 112w x 83h, and it is stitched mostly in cross stitch over two linen threads, with the miniature cottage stitched over one thread.

Judge Not… I almost didn't release this one! I just wasn't sure if it was going to be a keeper when I sent it to Penny to stitch, but when I got the model back from Sherri (the Fabulous Framer at Total Framing in Fairfax, Virginia), I kind of liked it! The stitch count is 223w x 91h, and it is worked entirely in cross stitch over two threads.

Sampler House III… I've been asked how many will be in this series, and I'm not quite sure of the answer to that. I had originally decided on five, but when I decided to release them in pairs, that turned to six, and if I come up with any more ideas, then that will turn to eight, and if I find that I've awakened at 3:45 again one of these mornings, that will turn into ten, and so on. You get the picture. 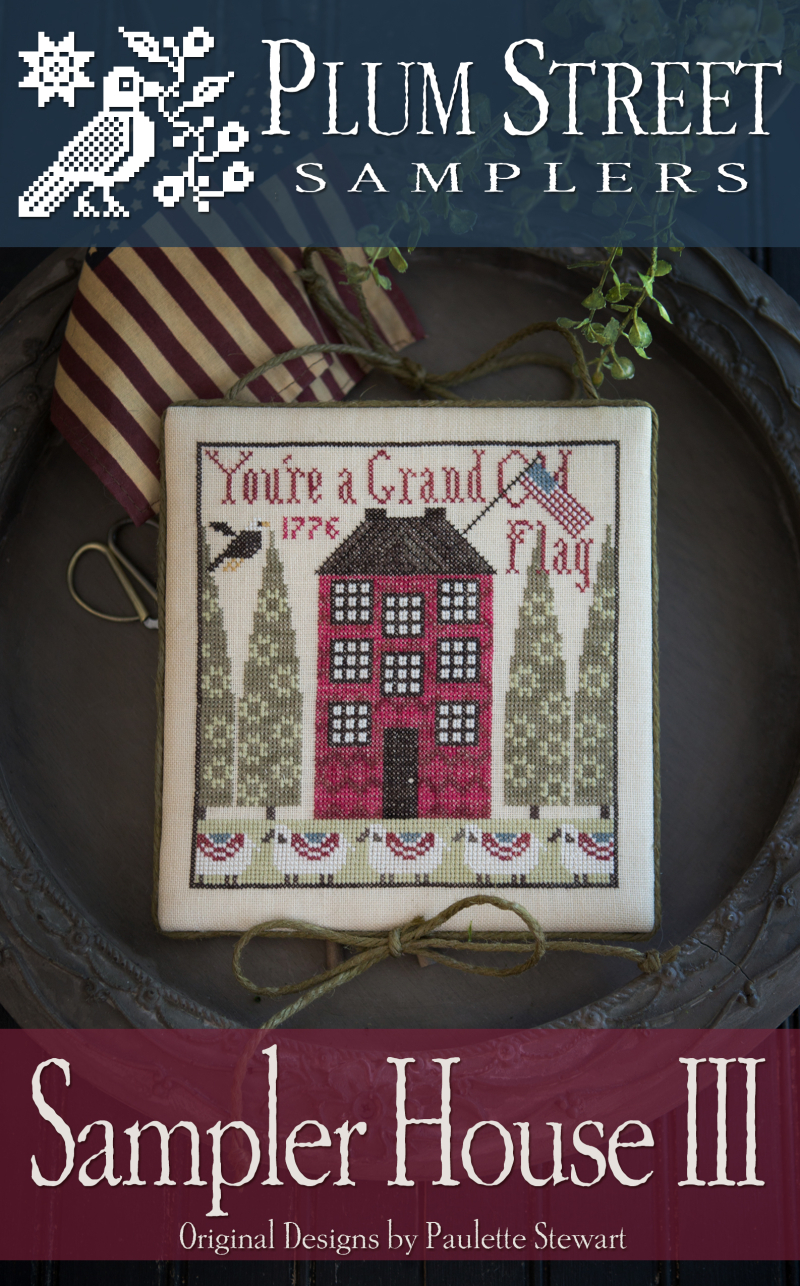 Pat Ryan stitched this model on 36 ct. Stars Hollow Blend by R&R Reproductions. The threads used are as follows: Classic Colorworks in Antique Lace, Blue Corn, Hickory Sticks, Blackbird, and Ye Olde Gold (on the key on the chart, I accidentally forgot to indicate that those last three colors are by Classic Colorworks also); Weeks Dye Works in Lancaster Red and Garrison Green (my new favorite green); The Gentle Art in Schoolhouse Red.

The stitch count is 98w x 99h (all of the Sampler Houses will be approximately the same size, by the way), and it was worked entirely in cross stitch over two threads.

The finishing was done by the talented Joy Hayward of Finely Finished.

Sampler House IV… Katrina Devine stitched this fall-themed house, and I love the colors she chose to convert to for this one as well! 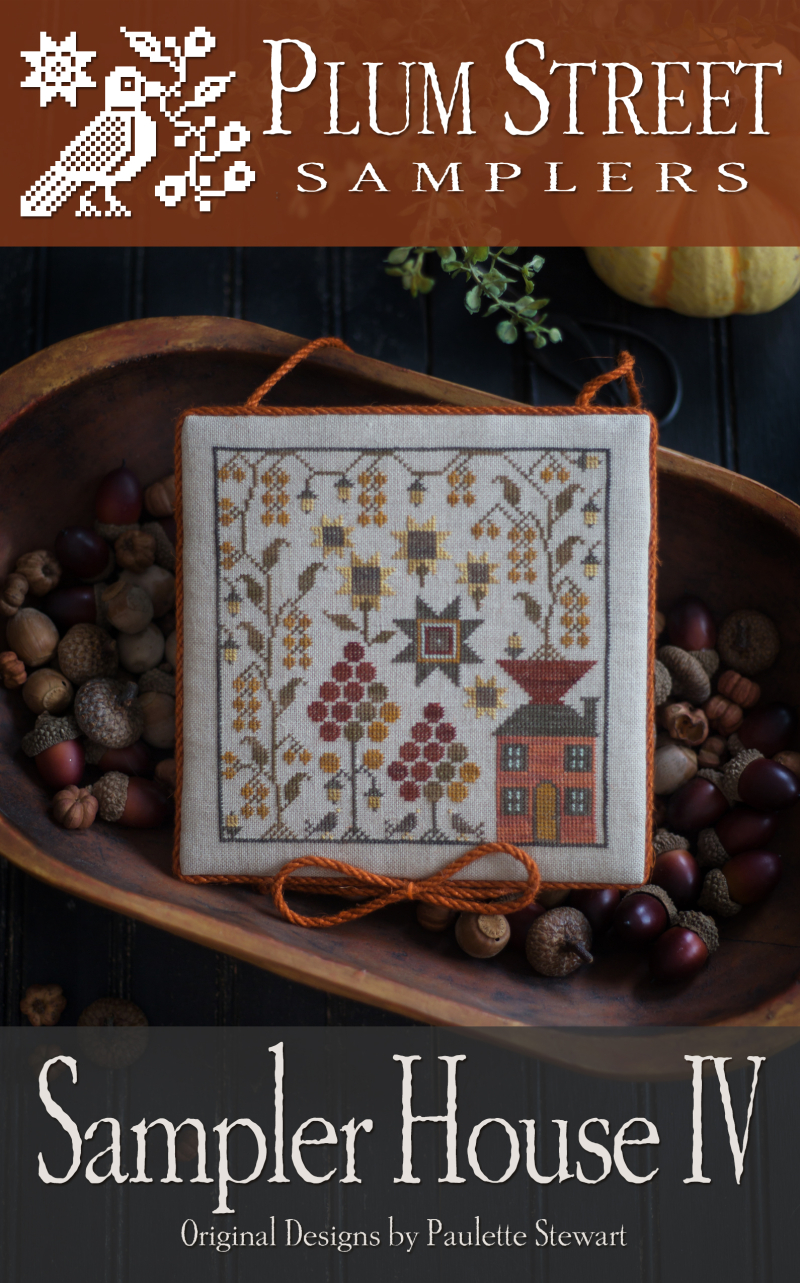 The model was stitched on 36 ct. Winter Brew by R&R Reproductions, and these are the threads used: Classic Colorworks in Olive Branch; Weeks Dye Works in Tiger's Eye, Havana, Terra Cotta, Caper, Grapevine, Charcoal, and Schneckley; The Gentle Art in Mulberry.

The stitch count for this is 98w x 99h, and the chart is worked entirely in cross stitch over two linen threads.

This one was also beautifully finished by Joy Hayward of Finely Finished.

And there you have it! Those are my releases for this month! I will be pre-releasing some new things at the Dyeing to Stitch retreat in September, as well as the Shepherd's Bush retreat class piece, Heritage Sampler. (Pat is busy working that onto a piece of 36 ct. Olde Towne Blend.) Then in early October, that set will begin making their way to your local shop.

Before I leave, I have one more chart clarification to make: 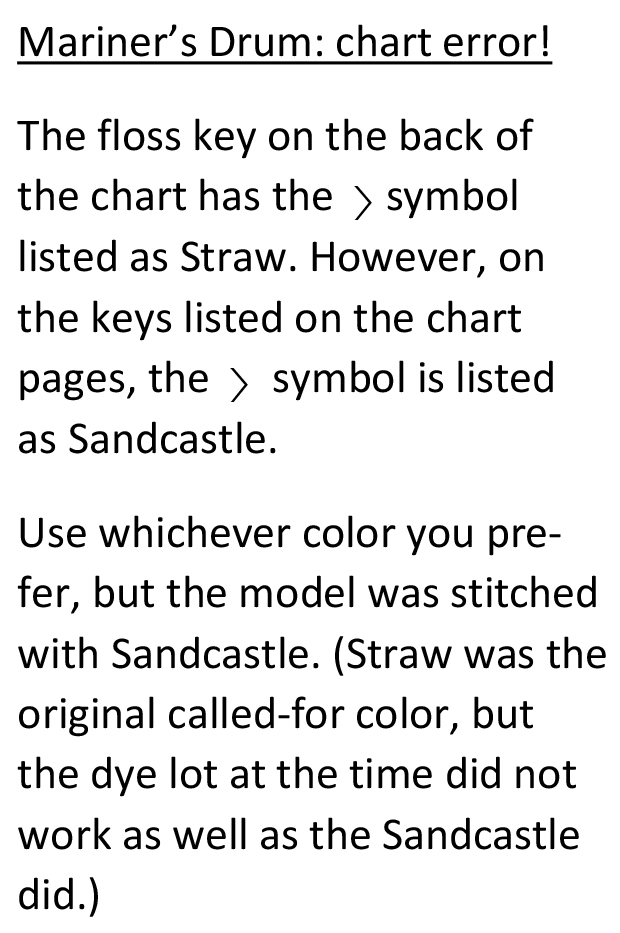 Thank you so much for stopping by!  I'll return soon with more of the long weekend in Tulsa!